I've seen a few recipes for Cookies and Cream Cupcakes.  My son loves Oreo cookies so I thought this would be a good recipe to try.  I settled on a recipe I found at Annie's Eats because it had actual Oreos in the cake and it just looked so good.  I made half of this recipe and I replaced the butter with margarine.  I also made a low fat version of the cream cheese frosting.  It ended up being very thin and I wasn't able to pipe it.  It was also too much since I wasn't piping.  I found the cupcakes way too sweet.  My dad called me the next day and told me they were way too sweet and his sugar had gone up.  The recipe called for putting half an Oreo at at bottom and then putting the batter on top.  I loved this idea and the way it looked.  But when eating I wasn't too fond of it.  I thought it was way too many cookies in the batter.  So I made another batch and reduced the cookies by half and I didn't put the half Oreo at the bottom.  I also coarsley chopped them so the cookies were more distrubuted.  In the first batch I broke the cookies into 4-5 pieces.  They turned out much better.  I still have to work on a good low fat cream cheese frosting but I've posted what I did below. 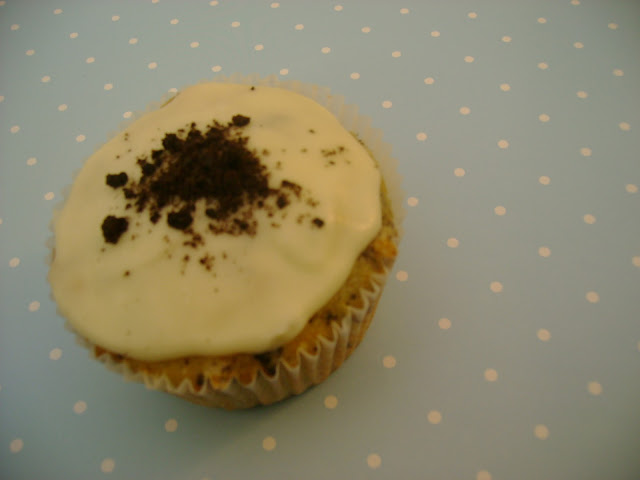 Preheat over to 350 F.  Line a muffin tin with 9 cupcake liners.  In a medium bowl, whisk together flour, baking powder, salt and vanilla powder.  Set aside.  Using an electric mixer, combine butter/margarine and sugar on medium-high speed until light and fluffy, about 2 minutes.  Beat in egg whites, adding one at a time, making sure the first is incorporated before adding the next.  Turn the mixer to low speed and add half of the dry ingredients.  Mix until just combined.  Add the milk and mix until just combined.  Mix in the remaining dry ingredients.  Gently fold in the chopped Oreos until evenly distributed being careful not to overmix.

Divide the batter between the prepared cupcake liners.  Bake for 18-20 minutes or until a toothpick inserted in the center comes out clean.  Cool in the pan for 5-10 minutes.  Transfer to a wire rack and cool completely. For the frosting, combine cream cheese and margarine with an electric mixer.  Beat on medium-high speed until smooth.  Add the vanilla powder and icing sugar.  Beat until incorporated and smooth.  Mix in milk.  Allow frosting to cool in fridge to make spreading easier.

NOTE:  Frosting was very thin.  I suggest omitting the margarine and milk but I have not tested this yet.  It also made way too much for 9 cupcakes.
Labels: Cupcakes Dessert Egg Whites