I have always wanted to bake bread.  I really really wanted to use the dough hook for my mixer.  For the longest time I have had such bad experiences with yeast...my dough would never rise.  It was always so disappointing.  I couldn't figure out what I was doing wrong.  I suspected it was my water temperature.  So I bought a thermometer so I could confirm.  Apparently what I thought was warm water is not....I was so excited when I saw my dough actually rose!! YEAH!!!! 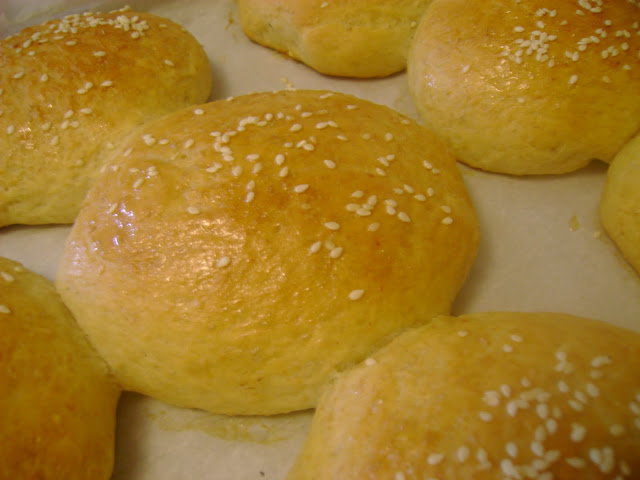 These buns are so easy to make and quick.  The mixer does all the work!  The first time I made them the tops were not nice and golden so I kept baking them and ended up over baking them.  I had made them for a bbq and we all enjoyed them even though I baked them too long.    My dad even took some home!!  The second time I made them once they were done baking I put them under the broiler to get those golden tops.  This time they were so soft in the middle.  They didn't look as golden as the ones from the original recipe but tasted great nonetheless.  I prefer to use just 1 tbsp of honey when brushing the tops.  Hasan was not too happy with the honey when I used 2 tbsp.  He refused to eat it himself because it was sticky.

In a measuring cup (or anything that you can pour from), mix the warm milk and yeast.  Stir to dissolve the yeast (mine didn't totally dissolve and I was feeling like this was not going to turn out).  In the bowl of a stand mixer, using the paddle attachment, mix the bread flour (2 cups), whole wheat flour and salt on low speed until combined.  Add the yeast-milk mixture, 1/4 cup honey and the egg.  Mix on low speed until dough has formed.  Change the attachment to the dough hook.  On low speed, continue to knead the dough until it is tacky but not sticky. (okay..I don't know the difference between sticky and tacky so I did it until I thought it was a little sticky....not too sticky....does that make sense???)  Add additional flour as needed (I added an additional 2 tbsp).  Transfer dough to a lightly oiled bowl.  Turn to coat and cover bowl with plastic wrap. Put in a warm, draft free place to rise.  It will take about1 1/2 to 2 hours to double in bulk.

Once risen, transfer dough to a lightly floured surface. Gently deflate the dough and divide into 9-10 equal sized pieces.  Shape each piece into a flattened circle (about 3.5-4 inches in diameter).  Place rounds on a parchment lined baking sheet.  Cover with a clean kitchen towel and allow to rise until doubled, approximately 1 hour.

Preheat over to 350 F.  Mix melted butter and honey (I prefer to use just 1 tbsp of honey) and lightly brush the tops of the buns.  Sprinkle with sesame seeds, if using.  Bake for 14-15 minutes, rotating the pan halfway through baking time.  Let cool for 5 minutes in the pan and then transfer to cooling rack to cool completely.