I bought some Dijon mustard to try a tuna casserole dish that didn't turn out too good.  Now I have a jar of Dijon mustard sitting in my fridge.  I hate wasting food so I want to finish this jar.  I searched in my Joy of Cooking cookbook and I found a recipe for Beef Stroganoff.  I made half this recipe.  My biggest change was how I cooked the beef.  We like our meat well done and we don't get halal fillet or sirloin.  So I used boneless stewing veal.  (Next time I think I will try using pasanday Note: Tried with pasanday and prefer this cut of meat much more) I first seared the meat with salt and pepper and then boiled it till it was tender.  I used the broth in a later step calling for beef stock.  I didn't use the Cognac or the dill (I don't have dill and am not very fond of it).  Beef Stroganoff is traditionally eaten with egg noodles.  I tried that and I found that rice was better option because it soaks up the sauce better.  It turned out good and was a nice change from the Indian food we eat everyday. 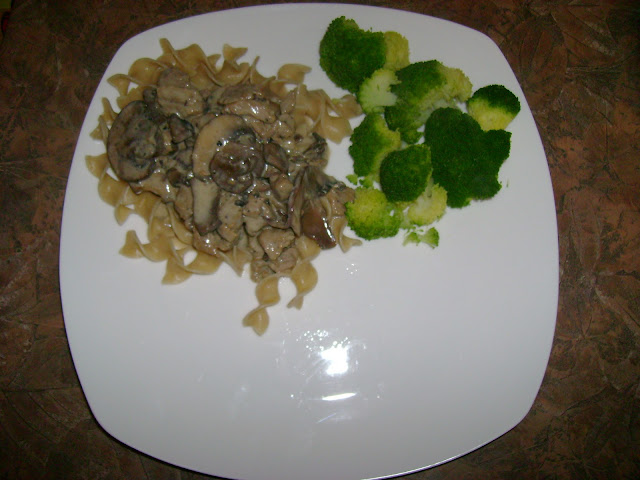 Salt and pepper veal to taste.  Heat1 tbsp oil and add meat.  Sear the meat and add some water.  Bring water to boil, cover pot and let cook until meat is tender.  Add more water as necessary.  At the end you want to have about 1 cup of broth.

In a seperate pot, heat remained tbsp of oil.  Add shallots and cook till translucent.  Add mushrooms and cook until water has evaporated.  Add broth and simmer about 10 minutes.  Add sour cream, Dijon mustard, salt and pepper (to taste).  Add meat and simmer for another 2 minutes. Serve with egg noodles or rice (we prefer rice).