Recently we had a small gathering catered by Simply Halal.  The food was amazing.  The pasta in particular was so good.  We ate it for the following 2 days and I didn't get bored of it.  I realized how I suck at making pasta.  For years I've been making my mom's pasta sauce and I've gotten bored of it.  Lately I have been looking at The Pioneer Woman blog.  I've already tried a few recipes with great success.  So I started to take a look at her pasta recipes.  Why does she use so much cream and butter?????  I'm not trying to put on 20 pounds.  If I used that much fat my cooking would improve no doubt...but I have modified her recipes to reduce the fat with good results so I have hope for her pasta dishes too.  This recipe had no cream or butter!! Yeah!!! But it had a ton of parmesan cheese which I significantly reduced. It also used 1 cup of extra-virgin olive oil. There was no way I could use 1 cup of oil!!!  I don't think I use 1 cup of oil to make a huge pot of haleem..how could I use that much oil for a pasta salad!!  So I reduced it by half and was so glad I did.  I think it would have been way to greasy if I hadn't.  Also I don't like olives so I left those out and after making this recipe I realized I don't like cherry tomatoes either so next time I'm gonna leave those out too.  My 4 year old son loved this pasta and for him I added a bunch of olives..I like to say he is eating olives with a little bit of pasta because he likes A LOT of olives. 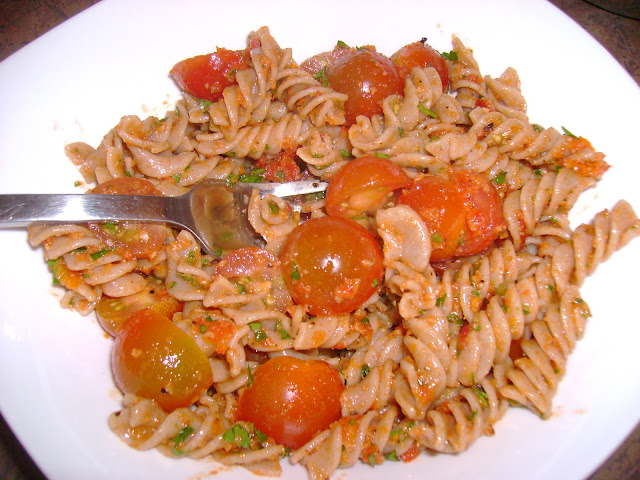 This recipe also has red wine vinegar.  I looked up on SunniPath if it was permissable to use vinegars that are alcohol based and it was okay.  I had bought the red wine vinegar but I was still feeling nervous about using something that had the word 'wine' in it.  So I looked it up again to ease my conscious.

This recipe was good hot or cold and I'm definitely going to make it again.  I used my immersion blender to blend all the ingredients which wasn't a very good idea because there wasn't a lot of space.  A blender would be a better way to go but I hate using the blender.  It's too noisy and would wake a napping 1 year old baby so I avoid using it.

Note: Please verify your red wine vinegar is Halal prior to using.  Some manufacturers add wine after the vinegar is made making them Haram.  Refer to this post on My Halal Kitchen for more details regarding alcohol based vinegars.

Salad:
16 oz of pasta (I used Farro fusilli)
1 jar of olives (I passed on these)
1 pint ripe cherry tomatoes, cut in half (next time I'm gonna pass on these too)
10-15 basil leaves, chopped or jullienned
1/8 cup parmesan cheese

In a blender combine all ingredients except the oil, until the tomatoes are chopped.  Continue blending and drizzle in the oil until combined.

Cook pasta according to package directions.  Drain and rinse with cold water until no longer hot.  Add desired amount of dressing (I used half).  Add remaining ingredients and toss to combine.
at March 14, 2011
Labels: Italian, Pasta, Salad, Sundried Tomatoes