I have eaten Risotto twice.  Once it was so delicious.  The other time it was extremely bland.  I have always been daunted with the idea of making Risotto.  I've  heard it is very time consuming.  Lately I've been looking at a few Risotto recipes and decided I would like to give it a try.  After reading a few recipes I realized compared to Indian cooking it really wasn't that time consuming.  The other thing I discovered was dry white wine is always added to Risotto.  So if you ever eat Risotto outside check if there is any alcohol in it.  Instead of wine I just used water.  I settled on this Risotto recipe because I had some asparagus in the fridge and needed to cook it before it went bad.  My changes to this recipe was mainly to reduce the fat but replacing the butter with olive oil.  I also used light cream cheese instead of mascarpone and significantly reduced the Parmesan cheese.  Even before adding all the cheese this was very tasty.  I also added garlic.  I don't think I cook anything without garlic.  I also used vegetable broth instead of chicken broth.  I reduced the lemon zest and lemon juice as well. 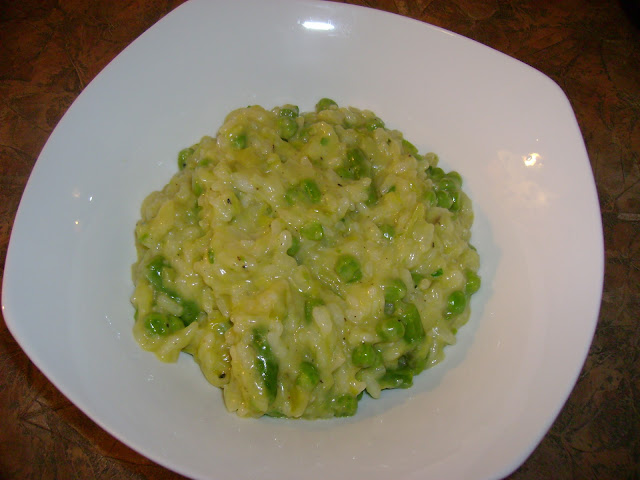 After making this I found out Risotto is not a make ahead meal.  I usually do my cooking in the afternoon so that is what I did with this. It was so good I had it for lunch.  As the time passed I saw the consistency was changing.  By the time dinner came it was very thick and mushy.  So when making this serve it immediately.  Leftovers taste different the next day too.

This recipe uses leeks which I have never cooked.  For instructions on how to prep leeks see Cookin' Canuck: How to prepare a leek.

In a medium pot, heat the broth over medium heat until it is simmering.  Reduce heat to medium-low to keep the broth warm.Heat the olive oil in a large saute pan (I don't have one so I used a dutch oven) over medium heat.  Add the shallots, garlic and leeks and saute for about 5-7 minutes until tender.  Add rice and stir for about 1 minute so that everything is well coated.  Add the water and stir until mostly absorbed.  Add the broth, 1/2 cup at a time, stirring until it is mostly absorbed.

While the rice is being cooked, bring a pot of salted water to boil.  Add asparagus and blanch for about 4-5 minutes or tender crisp.  Drain and put in a bowl of cold water to stop the cooking process.

After the rice has cooked for about 15 minutes, add the asparagus and peas.  Stir in lemon zest, salt and pepper.  Continue to add the broth, stirring constantly until rice is tender and firm. (Mine ended was slightly overcooked.  Next time I'm going to pay more attention).  It takes about 30 minute to cook the rice.