I need to start paying more attention to what I'm doing...but then again sometimes my lack of attention turns into something delicious...like this cake.  This is not supposed to be an eggless cake but I forgot the egg.  I had put this in the oven and was upstairs and it dawned on me...I FORGOT THE EGG!!!  This was the second time in a week I forgot to add the egg in something I was baking.  But this time I have an excuse....Hasan was helping me and I was trying to make sure he didn't make a mess.  At the same time I had to keep one eye on Bilal too.  But in the end I couldn't stop eating this cake.  I think I ate half of it in one day!  (But it's a thin cake so really it was like eating a quarter of a regular cake)  I usually don't like raspberries but I loved the tartness of the raspberries and the subtle sweetness of the cake.  It would definitely go well with a cup of tea.  My husband wasn't very fond of this cake..he thought there were too many raspberries but I think he also ate almost half the cake in one day. 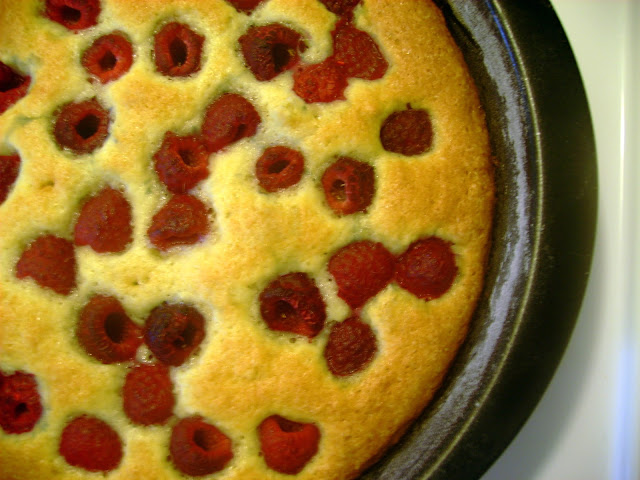 But the egg was not the only thing I forgot...I forgot to sprinkle some sugar on top before baking.   That would have given a nice crunch and sweetened the raspberries too.  If you would like to do this step just sprinkle the cake with 1 tbsp of sugar before baking.  The original recipe had vanilla extract.  I was all out of vanilla powder so I just left it out.

Preheat oven to 400 F with the rack in the middle.  Grease a 9 inch round pan and line with parchment paper.

In a medium bowl, whisk together flour, baking powder, baking soda and salt.  In the bowl of an electric mixer, beat together butter and sugar on medium-high speed until light and fluffy.  Reduce speed to low and add flour in 3 additions alternating with buttermilk, ending with flour.  Mix until just combined.  Spread in the prepared pan.  Sprinkle the raspberries on top and bake for 20 to 25 minutes.

* I never have buttermilk.  Please refer to Substitutions for a substitute (now that was redundant!!)