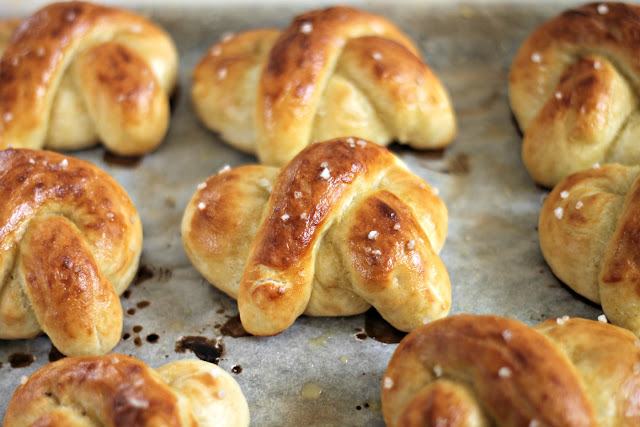 It's Secret Recipe Club time again!  For those of you not familiar with the club, everyone is assigned a blog from which they must make one recipe.  But you have to keep it a secret which blog you were assigned.  On Reveal Day we all post our recipe at the same time.  This month I was assigned the blog Double Dipped Life written by Krista.  Krista has a wide array of recipes.  I really wanted to try one of the enchilada dishes but they called for enchilada sauce....I've never seen enchilada sauce in a grocery store near me.  I settled on 2 recipes: Chewy Soft Pretzels and Garlic Naan.  I was all ready to make the Garlic Naan but as I read through the recipe I realized I didn't have enough time for the dough to rise since I had to pick my son up from school so I ended up making the Chewy Soft Pretzels and I was so happy that I did!  These turned out great! I just wished I had sprinkled on a little more coarse salt on them.  When they were baking it smelled just like one of those pretzel places in the mall.  We all loved them!  These taste best eaten the day they are made.  I should have rolled my dough out longer before shaping them since they look a little like buns.  After a little bit of research I found that the original recipe is from King Arthur Flour.  I've never spent a lot of time on their site but I've now tried a couple of recipes that originated from them so will have to give them a closer look. 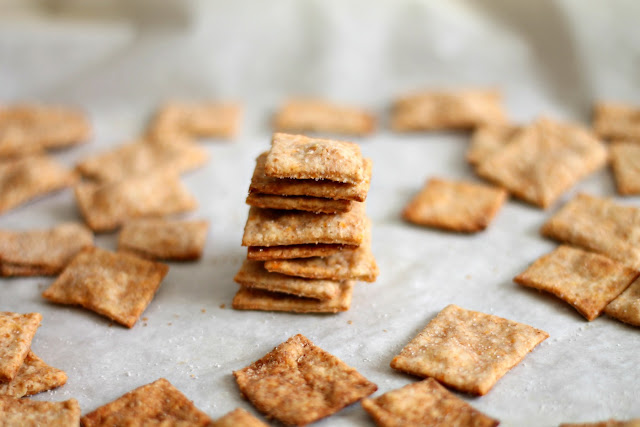 The most popular snack in our house is crackers so when I saw this on Oh She Glows I knew it would be perfect!  These were surprisingly easy to make and tasted great.  When rolling out the dough my edges were a little thin so those baked up darker than the rest.  Next time I'm thinking of tossing in some sesame seeds, poppy seeds or flax seeds. 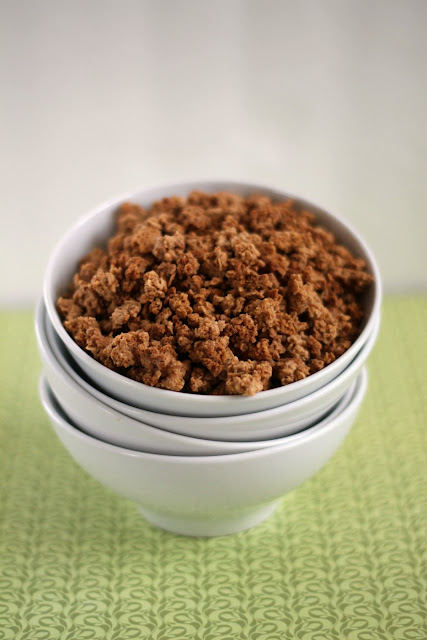 The other day I was doing my grocery shopping.  I was walking in the cereal aisle and came to the section with granola. I picked up a packet thinking I should get some to eat with the ton of yogurt I had gotten from Costco (I was trying to make frozen yogurt and had two very bad tries so I've given up on that for a little while).  I read through the ingredients and was surprised there were so few and I already had them all at home!  So I thought I would give a try at making granola at home.   When I had some time I started googling away and was disappointed.  The recipes called for old-fashioned rolled oats...I only had quick oats.  As I continued to search I came across two recipes that used quick oats.  One of them showed how if you grind some of the oats to a flour it will create clusters.  But this recipe had so much butter.  So I used the method for using oat flour and the ingredients from another recipe and it turned out great!  This is great with some yogurt, milk or just on it's own.  I love to have it with milk with some dried cranberries tossed it.  But I caution you...this is very high in sugar so don't be eating a whole bowl of it! 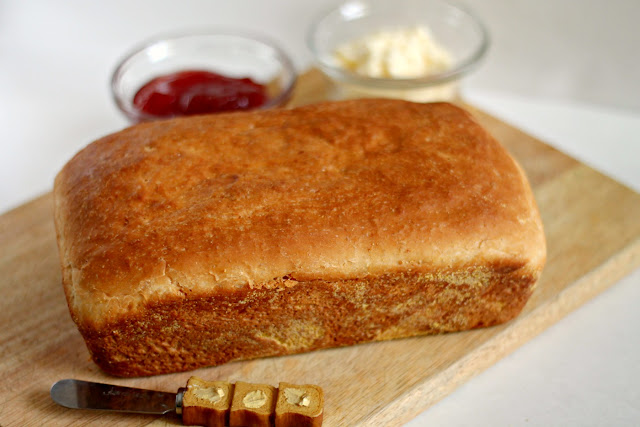 I have just recently started baking bread.  For years I was unsuccessful.  I now know the reason was because the water I was using wasn't warm enough.  This recipe is a great place to start for beginners.  I saw this recipe on Brown Eyed Baker.  This is a very easy bread to make and it's quick too!  There is only one period of rising.  For me it's perfect since I don't have a lot of time in the weekdays with looking after Bilal and dropping and picking up Hasan from school.  This bread is also really yummy!  I didn't think it really tasted like an English Muffin.  I wasn't able to get a lot of holes in the bread.  But the outside of the bread has a great crunch and it was moist inside.  It tastes great toasted with some strawberry jam and butter spread on top!