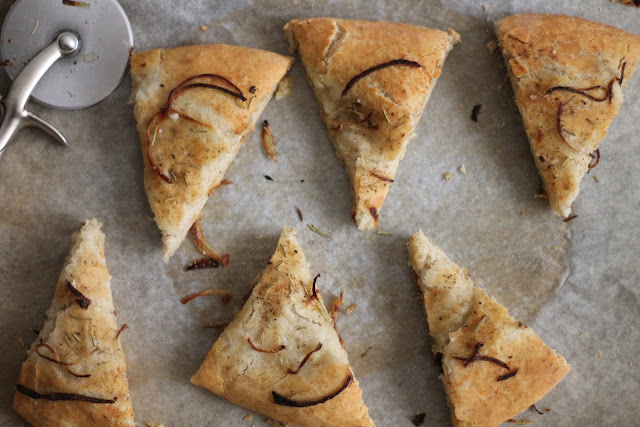 This is another recipe that uses the dough from the Light Whole Wheat Baguette recipe.  Unlike the focaccia I've seen in the past this one doesn't have a dimpled surface.  This is originally a Focaccia with Onion and Rosemary recipe but we aren't too found of rosemary in our house so I went easy on the rosemary.  Everyone loved this bread.  Hasan said it was "Excellent".  He had it for lunch and then for a snack!  I have also tried topping it with sundried tomatoes but they burned so I wouldn't recommend going that route.  The book mentioned that the focaccia would develop a crackling crust due to drizzling oil before baking.  I didn't see that effect but it still tasted great!

Preheat oven to 425 F with an empty broiler tray set on the lowest shelf (this would be below the rack you are baking the focaccia on).

Lightly dust the dough with flour.  Shape the dough into a ball by stretching the surface of the ball on all sides to the bottom, turning as you go.  On your work surface, sprinkle some flour (you don't want to use too much).  Roll out the dough to 1/2 -3/4 inch thickness.  Transfer to the baking sheet.

Fry the onions in the oil until softened.  If browned they will burn in the oven.  Scatter the onions over the dough leaving a 1 inch border.  You want to be able to see a lot of dough between the onion pieces.  You may not use all the onions.  Sprinkle with dried rosemary, coarse salt and freshly ground pepper.  Drizzle the oil in the pan over the focaccia ensuring it doesn't end up dripping over the sides.  You don't want to cover the entire surface with oil (1 teaspoon should be enough).  Allow to rest for 20 minutes.

After the focaccia has rested place it in the center of the oven.  Pour 1 cup of hot tap water into the broiler tray and close oven immediately.  Allow to bake for 25 minutes or until the crust is medium-brown.  Make sure you don't burn the onions.

Once done, cover with a clean kitchen towel for about 5 minutes.  Cut and serve warm!