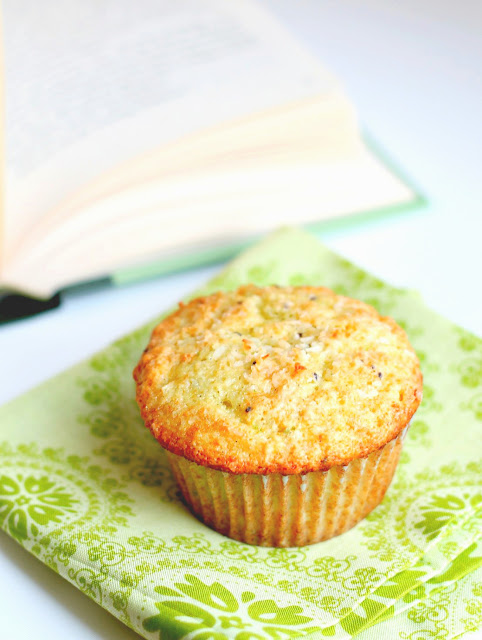 I saw these muffins awhile ago at An Edible Mosaic.  I wasn't sure about the flavour combination but I absolutely loved Faith's pictures so I had pinned it right away.  Everything I have tried over at An Edible Mosaic has turned out fantastic.  Most recently I had made Saffron Rice with Golden Raisins and Pine Nuts.

I have never been a big fan of coconut but lately I have been really enjoying it.  These muffins were really good....they were so yummy and all the flavours worked so well together.  I made a couple of changes to them.  One of them was to leave out the coconut milk but this really was more of a mistake.  After I had baked them I looked at the recipe and realized I had forgotten to add it.  I have made 3 batches in the past week.  Hasan loved them so much he had two in one sitting and he does not like kiwi at all!  He kept asking what was in them and I avoided telling him until he was done.  Hope you will give these a try!

Preheat oven to 400 F.  Line a muffin tray with 10 liners.  In a bowl, whisk together flour, baking powder, baking soda, salt and coconut.

In the bowl of an electric mixer fitted with a paddle attachement.  Cream together coconut oil and sugar.  Scrape down the bowl and add the egg.  Mix until light and fluffy.

Add the kiwi puree to a measuring cup and add enough water to make 1/2 cup + 2 tbsp.  Add the kiwi/water mixture, vanilla and lime zest to the mixer bowl.  Stir until combined.  Add in the dry ingredients and mix until just combined.  Fill prepared muffin tray and sprinkle each with some coconut.  Bake for 14-16 minutes.