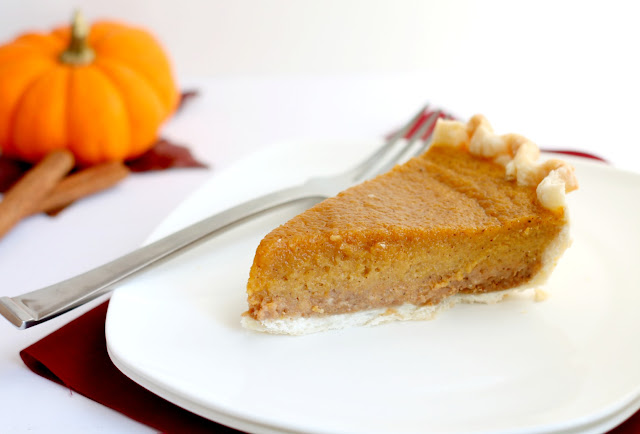 Hasan loves anything chocolate but somehow he got it in his mind that he wanted to try pumpkin pie.  So he kept telling me over and over that he wanted to eat pumpkin pie.  So one day I was grocery shopping and picked up a small pumpkin and then searching began for a recipe.  I saw some recipes used cream and some used evaporated milk.  All of them had buttery tarts.  I ended up at Joy of Baking and her recipe seemed very simple.  I made a few changes and then I found a recipe for a Coconut Oil Pie Crust at Baking Bites.  Now I had everything I needed so the baking began.

I wasn't sure if Hasan was actually going to like it.  After he had dinner he asked for dessert and I told him about the pumpkin pie.  All of a sudden he had changed his mind and wasn't interested in it.  I got him to take a bite and he didn't like it.  Like most kids, he likes crunchy things and the filling is quite soft.  But me and my husband really enjoyed this.  The filling is very soft.  My husband described it as "halwa".  I loved the coconut oil crust.  I've never had pumpkin pie before so I don't know how it compares but we loved this!

This was actually pretty simple to make.  For me the hardest part was trying to roll the dough into a circle...I'm horrible at rolling anything out.  Nothing ever comes out a circle.  This pie has a graham cracker-walnut layer between the dough and the filling.  This helps to stop the crust from getting soggy.

I made my own pumpkin puree.  For easy to follow instructions hop over to Annie's Eats.

First make the Coconut Oil Pie Crust.  In a large bowl, whisk together flour, sugar and salt.  Add the coconut oil and using a pastry blender or fingers mix in until it resembles coarse sand and no pieces are larger than a pea.

Gradually add cold water, a couple of tablespoons at a time.  Using a fork, stir until dough almost comes together.  Form the dough into a ball and wrap in plastic wrap.  Chill in the fridge for at least 1 hour. (Based on a reader's feedback I would suggest refrigerating no more than 1 hour.  Half an hour should be enough.)

Once dough is chilled, preheat over to 375 F.  On a lightly floured surface roll out the dough.  You may need to let it sit for a few minutes to make rolling out easier.  Transfer to a glass pie dish.

Combine ground graham crackers and walnuts.  Pour this on to the pie crust.  Spread to make a thin layer.

In a large bowl, add the eggs and lightly beat.  Add the remaining pie filling ingredients and whisk until combined.  Pour into prepared pie dish.

Bake 45-55 minutes or until a tester comes out clean.

Serve with dollop of whip cream!