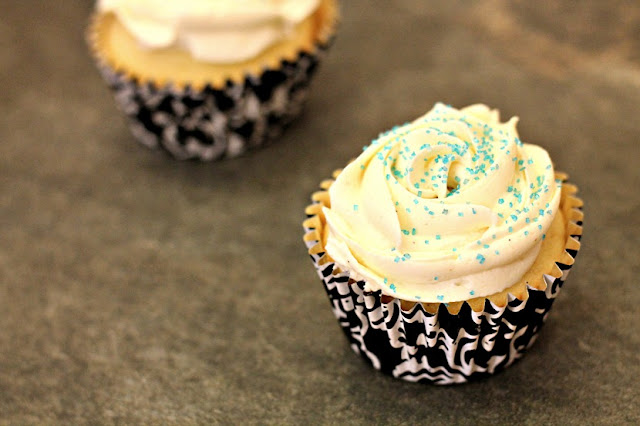 It Secret Recipe Club time once again!  This month I was assigned A Cook's Quest.  A Cook's Quest is written by Jenn.  Jenn started her blog when she realized life was getting too busy and she was not enjoying her favorite hobby...cooking.  Jenn's recipes are family friendly, easy to prepare and pretty healthy too!  All things that I love!  For some of Jenn's recipes she has actually calculated how much it costs to make the recipe which really puts into perspective how much cheaper it is to cook at home than to go out.

As usual there were quite a few contenders for which recipe I was going to make.  Among them was Salt and Vinegar Potatoes, French Bread Rolls and Apple and Spice Baked French Toast.  But in the end my choice was Jenn's Flour Frosting simply because I was baking a cake and some cupcakes and needed a frosting recipe.

This frosting is a bit more time consuming than a regular buttercream.  It was less sweet than buttercream and didn't crust up.  It piped beautifully!  I was nervous since it used granulated sugar instead of icing sugar so I thought it might be grainy.  When I tasted it before the mixing was done it was grainy and I was getting nervous but I let the mixer continue and amazingly the frosting was not grainy at all in the end!  I doubled the recipe below for one cake and a dozen cupcakes.  Thank you Jenn for sharing this recipe!  Please drop by Jenn's blog A Cook's Quest to check out some more great recipes!

In a small saucepan, add the flour and milk.  Whisk together.  On medium heat, whisk continuously until it starts to thicken.  Continue to cook until it is thick like pudding.  Push through a stainer and allow to cool.

In the bowl of a stand mixer fitted with the whisk attachment, beat together the butter and sugar until fluffy.  While beating add the flour and milk mixture and the vanilla.  Beat on high for at least 7 minutes until the frosting is fluffy.  If it is not coming together just keep beating until it does.  Pipe as desired!