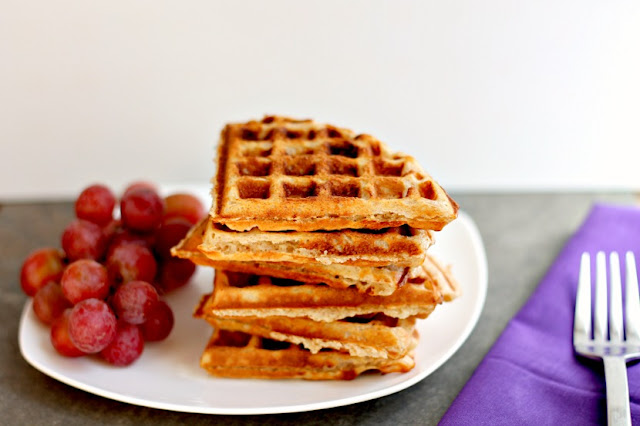 It's time for Secret Recipe Club again!  This month I was assigned I am a Honey Bee written by Nicole.  Nicole cooks, bakes and scrapbooks too!  While browsing Nicole's blog I found a recipe for Green Tomato Bread.   Last year we had an abundance of green tomatoes.  I was picking the green tomatoes from the backyard because I found as I let them ripen on the vine I would find little holes made by bugs so I would pick them early and let them rippen indoors.  Since I had so many I started to google green tomato recipes and came across Nicole's recipe which I bookmarked but didn't get around to making because my husband starting making an amazing kheema with the green tomatoes.  This year the tomatoes are slower coming in and they are too small to be picked.  So in the end I decided to try out Nicole's Whole Wheat Waffles.

Hasan is always asking for waffles in the morning and I've been wanting to try out a whole wheat version as opposed to the one I normally make.  The day I decided to whip these up the boys already had their breakfast by the time I came downstairs.  So I decided I would make the waffles and we could just reheat them the following day.  I told Hasan he would have to have to try them and let me know how they were. The first batch were done.  The boys were busy playing with Play-Doh so I went over with a waffle topped with maple syrup.  Before trying Hasan immediately said "I'm only having one bite...that's it".  Next thing I know both boys kept asking for more and they ended up having waffles for lunch :)  These were a big hit and I think they will become my regular waffles from now on.  Thanks Nicole for sharing a great recipe!

100% Whole Wheat Waffles
Adapted from I am a Honey Bee

In a large bowl, whisk together whole wheat flour, baking powder, salt and sugar.  In a medium bowl whisk together egg, milk, orange juice and canola oil.  Add the wet ingredients to the dry ingredients and whisk quickly until just combined.  Cook in your waffle maker according the the manufacturer's directions.  Serve with maple syrup!