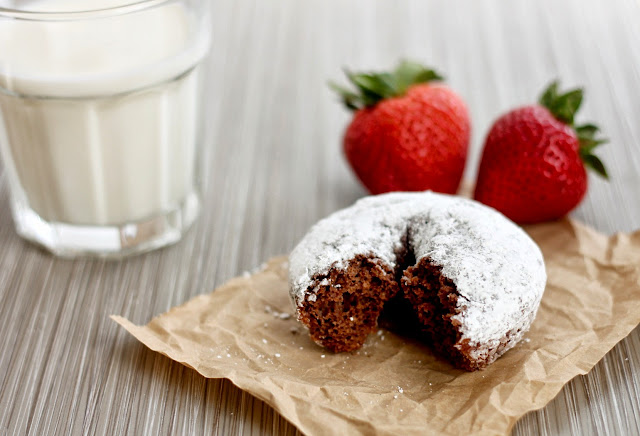 It's the last Monday of the month which means it's time for Secret Recipe Club!  This month I was assigned So Tasty, So Yummy written by Katie.  Katie has a ton of recipes and it was really hard to narrow it down.  I wanted to make so many of her dishes like Baked Chicken Burritos with Sour Cream Poblano Sauce, Chicken Gyros and Shake Shack Burger.  But in the end I settled on her Whole Wheat Chocolate Doughnuts.

Since school started I've been trying to make breakfast more interesting for the boys.  Something they can look forward to so that they wake up quickly and also eat quickly.  I've already made Strawberry Scones and Chocolate Chip Muffins with half the flour substituted with whole wheat and using some coconut sugar.  I've been trying to use more coconut sugar in my baking because it has a low glycemic index which means it doesn't give you a big sugar rush and then a sugar crash.

So when making Katie's Whole Wheat Chocolate Doughnuts I used coconut sugar and I also added in some walnuts. I replaced a little bit of the milk with orange juice as well.  I read on King Arthur Flour that adding a little bit of orange juice helps to take away the bitterness of whole wheat flour.  I've made these twice already. Hasan preferred it without walnuts because he didn't like the crunch.  The first tine they had them for breakfast I asked him if they were good.  He said "No...they are awesome!"

Instead of the chocolate glaze Katie used, I used icing sugar.  I think the icing sugar makes these head in the direction of not so healthy. Although you won't taste the whole wheat, these are not a decadent doughnut.  But they make the boys think they are eating dessert for breakfast and their plates are clean in no time!  Thanks Katie for sharing this recipe!

* I don't use a lot of applesauce so I like to buy the baby food applesauce since the quantity is small and I know it's just apples.

In a large bowl, sift together flour, coconut sugar, cocoa powder, baking powder, salt and vanilla powder.  Stir in walnuts.  Add remaining ingredients and mix well.  Pipe into doughnut pan. I filled a Ziploc bag with the batter, cut of a corner and piped it in.

Back for 7 minutes.  After they are done baking let the dougnuts rest for 2-3 minutes in pan and then carefully remove them and transfer to a cooling rack.  Since there is so little oil in these doughnuts they didn't just pop out.  I ran a spatula around the edge and carefully took them out.

In a Ziploc bag, add some icing sugar.  Add one doughnut to the bag.  Seal bag and then shake until doughnut is well coated.  If you do this ahead of time the icing sugar will get absorbed into the doughnut.  I like to add the icing sugar right before they are going to be eaten.