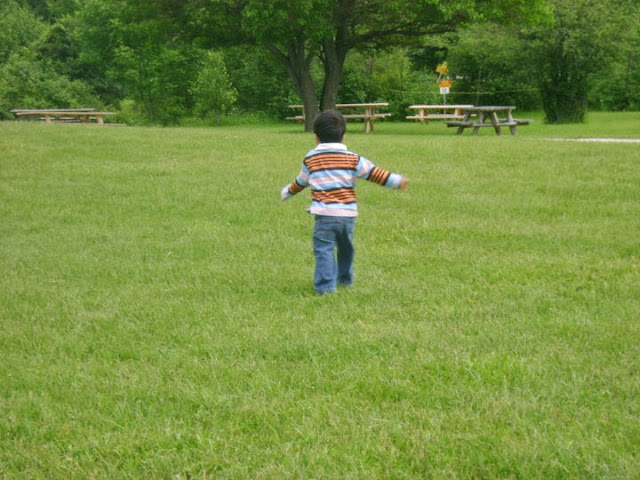 Time goes by so quickly and life gets so busy that we tend to forget about many of the first moments in our children's lives.  Many times I look at my two boys and can't believe how big they have gotten.  Them taking their first steps seems like ages ago.  It seems like once they figured out how to walk, all they wanted to do was run.  Even now it seems like they never walk anywhere...it's always running.

I remember the first time Hasan ate solid food.  It seemed like he had had enough with being on a milk only diet and was literally attacking the spoon every time I came close with some cereal!  Bilal on the other hand was not as eager and it took some encouraging and patience with him.

With finger foods I remember it took Hasan a long time before he would feed himself.  I would always give him some puff snacks and usually he would just throw them on the ground.  Then the first time he actually fed himself was when he was 14 months and we were in the car.  With one puff in the palm of his hand, he put his entire hand in his mouth to get just one tiny puff in :).  Bilal caught on a lot earlier but he also had his big brother's example to follow.

A child's first year is filled with so many exciting moments.  In celebration of theses moments Cheerios has brought back the First Cheerios campaign.  First Cheerios is a chance to share your child's First Cheerios moment.  You can join in on the celebration by uploading your child's First Cheerios moment pictures to the mosaic at General Mill's Life Made Delicious Facebook Page.  This is an interactive mosaic celebrating baby's first finger foods.  Everyone that uploads a picture will also receive a $1.00 off coupon for a box of Cheerios.  Also you could have your photo featured in the 2014 completed mosaic which will be printed on a special edition of Cheerios.  Soon you will be seeing a similar mosaic on Cheerios boxes from the pictures submitted last year in grocery stores!  So head over to General Mill's Life Made Delicious Facebook Page to enter your picture for the mosaic!

Disclosure – I am participating in the First Cheerios blogger campaign by Mom Central Canada on behalf of General Mills. I received compensation as a thank you for participating and for sharing my honest opinion. The opinions on this blog are my own.
at September 30, 2013
Labels: MC