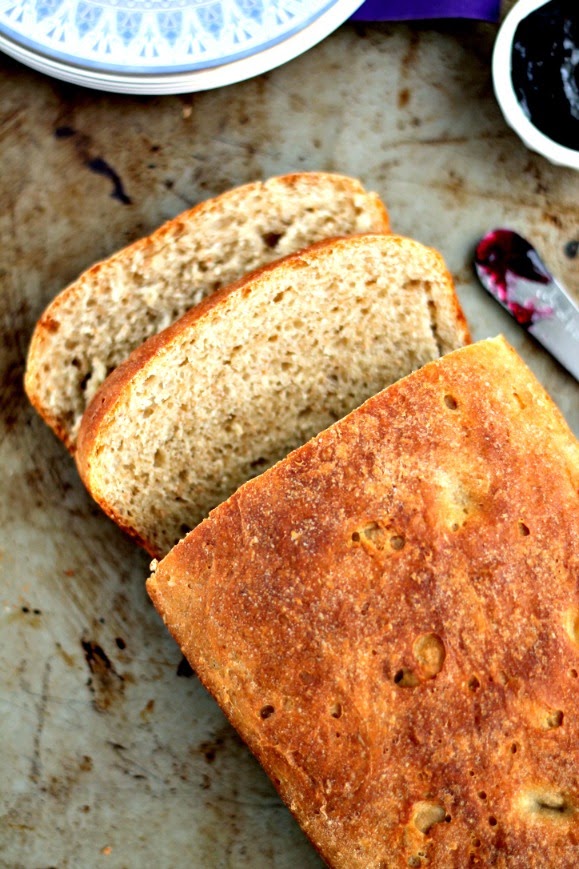 Today is the day for The Secret Recipe Club reveal.  This month I was assigned Food.Baby.Life. written by Susan. Susan lives in Australia and has been blogging for 5 years.  She has 3 boys all under the age of 5.  Susan loves to bake and I really admire the changes she made to her family's diet by eliminating sugar and processed foods.  She tries to make her own condiments as much as possible...that is a great achievement!  After browsing through her recipes I decided to make her Whole Wheat Loaves.  We were out of bread and I haven't yet tried to make a Whole Wheat Bread before.

As with all things made with yeast there is a lot of time spent waiting for the dough to rise.  So this was perfect to make during the March Break.  I love to bake bread and love how it makes the home smell.  The recipe is originally from Julia Child.  When Bilal saw I had baked bread he immediately had to have a taste.  He then insisted I make his burger for dinner with the bread instead of a bun.  The recipe uses Malt Extract which I don't have so I just used more honey which gave it a wonderful flavour.  I also made half the recipe.  The recipe below gives one loaf.

To the bowl of a mixer fitted with the dough hook, add 1/4 cup of the water.  Add the yeast and 2 tbsp of honey.  Whisk to combine and let sit for 5 minutes.

In a separate bowl combine the bread and whole wheat flour.

To the mixer add the remaining water (3/4 cup plus 2 tbsp), oil, 1 1/2 tsp honey and half of the flour mixture.  Turn the mixer on and off a few times to combine the ingredients. This prevents the flour from flying all over.

With the mixer on low, add the remaining flour.  Increase the speed to medium until the dough comes together.  If the dough is not coming together add a tbsp or 2 of flour.  Add the salt and continue to beat on medium speed for about 10 minutes or until smooth and elastic (mine was done in under 4 minutes).

Transfer the dough to a lightly floured surface and shape into a ball.  Put in a lightly greased bowl  and cover tightly with plastic wrap.  Let rise until doubled in size (1 - 1 1/2 hours).

Deflate the dough and transfer to a lightly floured surface.  Pat to a 9" x 12" rectangle.  With the shorter side facing you fold in thirds like a letter.  Pinch the seams.  Turn 90 degrees and again fold like a letter and pinch the seams.  Shape into a loaf size.  I picked up my dough and dropped it to help shape it.  I got the idea from this video.  Not sure if this was a good idea to do but it was fun!

Put shaped loaf into prepared pan.  Grease a piece of plastic wrap (I used the one from the first rise) and cover the pan.  Allow to rise at room temperature for about 1 hour or until the loaf has doubled in size and has grown over the top of the pan.

In the middle of the second rise, preheat the oven to 375 F.

Bake the bread for 30-35 minutes or until golden.  Remove the loaf from the pan and allow to cool on a cooking rack.