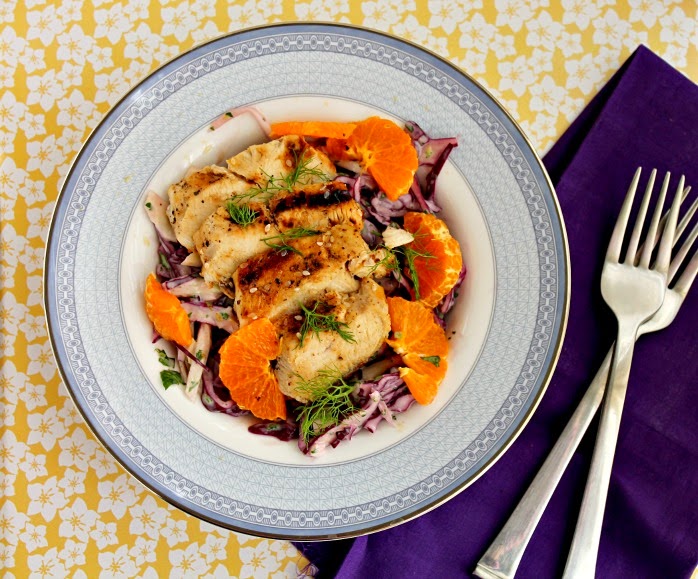 Today I am recreating Canadian Living's May cover recipe.  May's cover recipe is a Sesame Chicken with Fennel and Orange Salad.  When I received this month's recipe I was excited to try something that was totally different from what I would normally make.  I've never worked with fennel bulbs before although we always have fennel seeds (saunf) in the house.  I was nervous because fennel bulbs have a licorice taste and I'm not a fan of licorice.  Also cabbage is not my most favourite vegetable.  I've never been a fan of coleslaw.  But I thought this was a great opportunity to try something new and out of my comfort zone.

To start I Googled how to cut a fennel bulb.  I learned the "dill-like" pieces are edible and should be saved for garnish.  These are called fronds.  To cut a fennel bulb, first cut off the stalks.  Next slice the root part off.  Stand it up and slice in half.  Cut the white core at the bottom out of each half.  Finally cut off any brown spots on the outside of the bulb and slice the fennel.

This recipe was very easy to make.  The salad doesn't require any cooking and the chicken grills up very quickly.  After taking pictures I called my taste testers (my boys) to come and try it.  Hasan loved it!  He kept saying "It's really good".  Bilal was still full from lunch so wasn't interested in trying any.  I enjoyed the chicken but I prefer cabbage to be cooked.  The fennel did not give the dish a strong licorice taste which was a plus for me.  I thought the orange was a great addition to the dish.  It gave a nice bite of sweetness.  My family really liked the crunch from the cabbage and fennel.

This is a nice light meal that doesn't take a lot of effort to put together.  The flavours all complement each other well.  I had to make one substitution when making it.  The recipe calls for grainy mustard.  When I went to go pick some up I saw that it contains white wine.  So instead I used Dijon mustard which worked out well.  My kitchen was overflowing with clementines so I used those instead of an orange.

Disclosure: This is a sponsored post for the Canadian Living Blogger Network.  All opinions are my own.
at April 16, 2014
Labels: Cabbage, Chicken, CLBN, Fennel Bulb, Orange