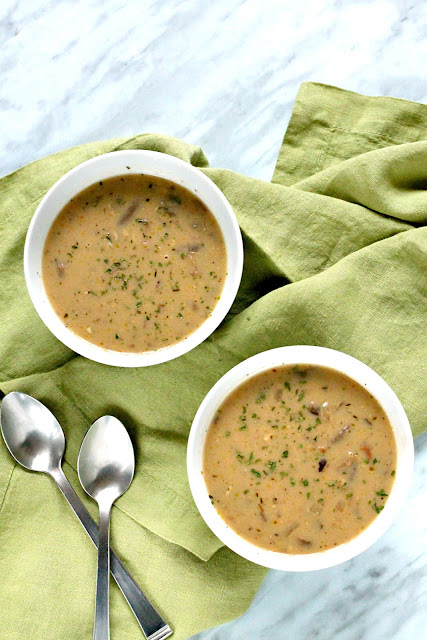 Today I'm sharing another soup recipe.  This has become a favourite in our home and I've probably made it 4 times in the last two weeks.  The last two times, I doubled the recipe!  I've called this Umami because I've used umami seasoning that I had picked up at Trader Joe's when I was in America during the winter break.  I didn't need to add any salt as the umami seasoning and vegetable broth had enough.  This soup will be great even without the umami seasoning.  I've made this a low fat recipe, by using sour cream instead of heavy or table cream.  When I first made the soup, there was a lot of clumping of the flour.  To solve this, I added one cup of broth at a time and whisked thoroughly.  This reduced the clumps of flour to a minimum.  The last two times I've made this soup, I was not able to find dried porcini mushrooms in the grocery store and it still turned out delicious.  I hope you enjoy this soup as much as we do!

Prior to starting you need to re-hydrate the dried porcini mushrooms.  Put the mushrooms in a small bowl.  Cover with boiling water and allow to soften.  Once softened, remove mushrooms, squeeze out liquid and chop.  Keep remaining liquid.

Heat a pot over med-high heat.  Add oil.  Once hot, add onion and garlic.  Cook until starting to brown.

Add umami seasoning, thyme (rub between your fingers before adding) and mushrooms.  Stir and cook until mushrooms release their liquid.

Gradually add vegetable broth.  Start with one cup and whisk well.  Continue to add remaining broth one cup at a time, whisking thoroughly between each addition to make sure the flour gets dissolved.

Bring to a simmer and allow to cook uncovered until thickened, about 30 minutes.  Stir in sour cream, black pepper and red chilli flakes.  Simmer until desired thickness is reached.