My mom makes a really good chicken pie. She got the recipe from my cousin, Shaytaj appa.

My cousin, Rafia, LOVES this pie.  Whenever she visits from Chicago my mom makes this...actually she makes 2 or 3 pies and there is usually barely any left (Rafia doesn't eat all the pies....it is both of our families that devour them).  The one thing about these pies is my mom uses puff pastry for the dough...puff pastry is loaded with saturated fat.  I would love to make my mom's pie but as is it wouldn't be a regular in our home.  My husband also loves this pie and has been asking me for awhile to make it but with a more low fat dough.  So I've been searching for awhile for an alternative to the puff pastry....I found it a few weeks ago at My Halal Kitchen.  She made a chicken pot pie and used phyllo dough and even better...she didn't use melted butter to brush between the sheets...YEAH!!! 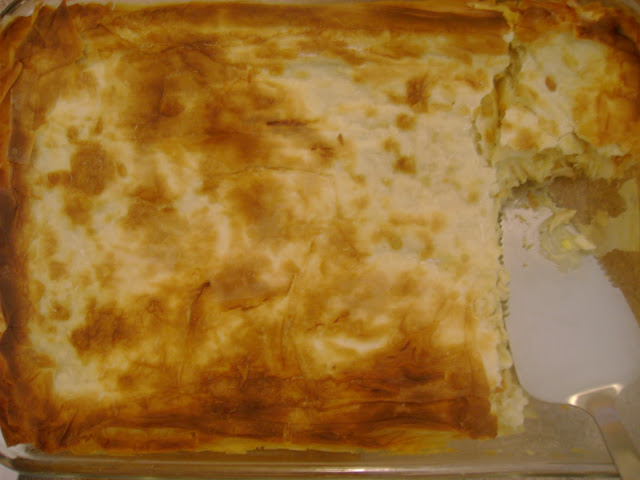 The day I was making this I called my mom to make sure I had the right directions for the filling.  She was explaining it to me and she went on to explain what to do with the puff pastry.  I told her I was using phyllo dough...her reaction "No No No......you use puff pastry"....No Mummy...I'm using phyllo dough.  She was so worried about it she called me a couple of hours later saying it might be too dry.  I told her not to worry.....I knew what I was doing....she gave me a very hesitant "Okay". While we were eating dinner, Hasan tapped me on the arm and said "I love this!"  That is all the approval I need!!!!

If you don't like a strong ginger garlic taste you can cut down on it in the recipe....we on the other hand love ginger and garlic!

In a medium sized pot over medium heat, add the chicken breast, adrak laysan, 3 tbsp water, salt and pepper.  Cook until the chicken is cooked through and the water has all evaporated.  Remove to a bowl and set aside.

Once the chicken is cool enough to touch, break up into very small pieces.  Add the boiled eggs and mix.

Now to make the roux....In the same pot you used to cook the chicken, heat the oil over medium heat.  Add the flour, adrak laysan, salt and pepper.  Stir continuously.  Once the flour mixture has turned a light brown, slowly add the milk, a little at a time.  Mixing well between each addition.  If you add it all at once you will get a lot of lumps.   Once this sauce has thickened, add the chicken and egg and stir well.  Check seasonings and add any needed salt and pepper.  Allow the mixture to cool.

Take the phyllo dough out of the packaging.  Cut in half at the fold.  Wrap one half back in the packaging and put back in the fridge.  In a large mug mix together the milk and olive oil.  In a 8x12 baking dish, brush a little of the milk mixture at the bottom.  Put one sheet of phyllo dough.  Brush with some of the milk.  Continue until you have used up all of the dough.  Spread the chicken mixture on the phyllo dough.  Take out the phyllo dough that was in the fridge.  Continue to make layers of phyllo brushing with the milk between each layer.  When you get to the final sheet, brush the top with the milk.  Bake for 20-25 minutes.  At the end, I put mine under the broiler for a minute to brown the top more.