I found this recipe at Kraft Canada.  It's actually a recipe for popsicles.   I was hoping these would taste like Creamsicles...I LOVE CREAMSICLES!!  But it actually tasted like Orange Sherbet...which I also happen to love :).  This recipe has only 3 ingredients and s very quick to make.  The most time consuming part is waiting for it to freeze. 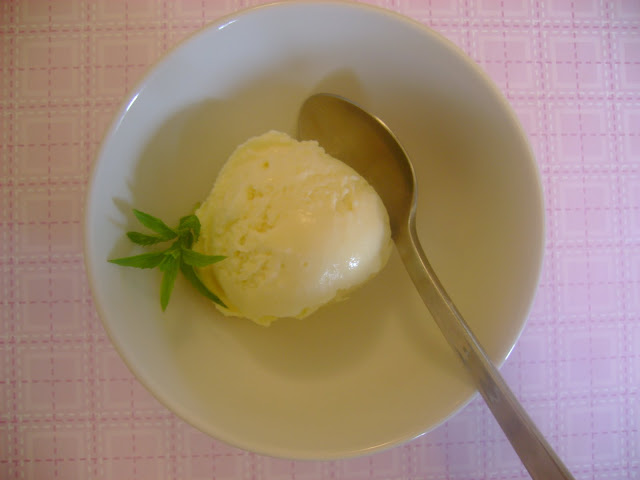 This didn't work well as a popsicles.  When I went to take the popsicle out, the stick came out and the rest stayed put.  I kept it in the freezer for over 24 hours and still no luck.  So I scooped it out and put it in a container to eat like ice cream.  This went fast and one small little scoop of ice cream  is all that was left when I went to take a picture.  I omitted 2 cups of mini marshmallows from the original recipe so maybe that is why it didn't work well as a popsicle.

In a mixer, beat together the marshmallow creme and orange juice until well blended.  Start the mixer on low and then slightly increase to medium.  Add the Cool-Whip and mix on low until combined.  Pour this mixture into a container and freeze.  After an hour take out and give it a good mix and return to the freezer.  I would do this a couple of times to make sure the orange juice doesn't separate.