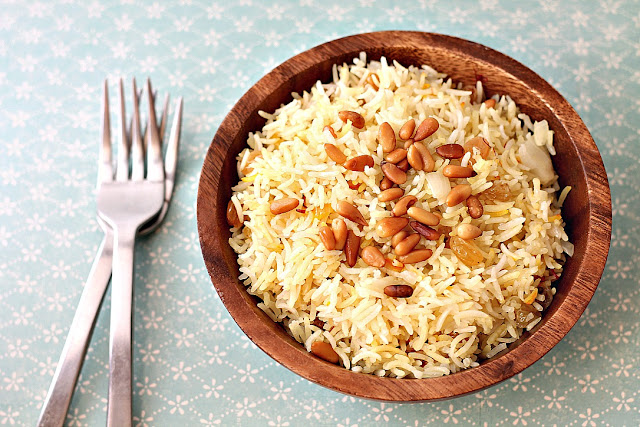 Since I've started writing this blog I've discovered so many other amazing blogs and bloggers.  One of those people is Faith Gorsky who writes An Edible Mosaic.  Faith's blog has recipes from all over the world but the ones that made me start reading Faith's blog were the Middle Eastern recipes.  We love Middle Eastern cuisine and I am always searching for great recipes. 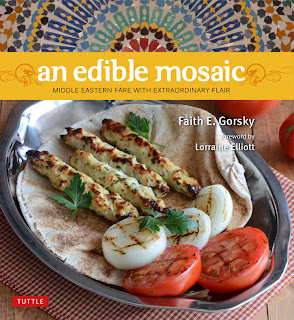 My husband has been asking me to try to make more Middle Eastern dishes so this book is perfect timing!  In particular he wanted me to try to make a rice dish with raisins.  A little while later I received an email from Faith regarding her Virtual Book Launch Party and this recipe...again perfect timing!  This rice dish was super simple to make and was delicious!  At first we felt lost as to what to eat it with as raisins aren't an ingredient I use in my Indian cooking.  In the end we preferred to have this rice with something simple that didn't have any overpowering spices.  Such as some simple broiled fish or chicken.

Soak rice in tepid water for 10 minutes, drain.  While the rice is soaking, put half a kettle of water on to boil.

Add oil to a medium, thick-bottomed lidded saucepan over medium heat.  Add the pine nuts and cook until golden brown, about 1 to 2 minutes, stirring constantly.  Transfer the pine nuts to a small bowl and set aside.

Add the onion to the saucepan you cooked the pine nuts in, and cook until softened and just starting to brown, about 5 to 7 minutes, stirring occasionally.  Add the rice and cook 2 minutes, stirring frequently.  Stir in sultanas, boiling water, salt, and saffron (or turmeric), turn the heat up to high, and bring to a boil.

Give the rice a stir, then cover the saucepan, turn the heat down to very low, and cook until tender, about 10 minutes (do not open the lid during this time).  Turn the heat off and let the rice sit (covered) 15 minutes, then fluff with a fork.

Transfer to a serving dish and sprinkle with the toasted pine nuts on top; serve.

OPTIONAL:  Add 4 pods of cardamom, two whole cloves, and one 2-inch (5 cm) piece of cinnamon stick at the same time you add the rice.