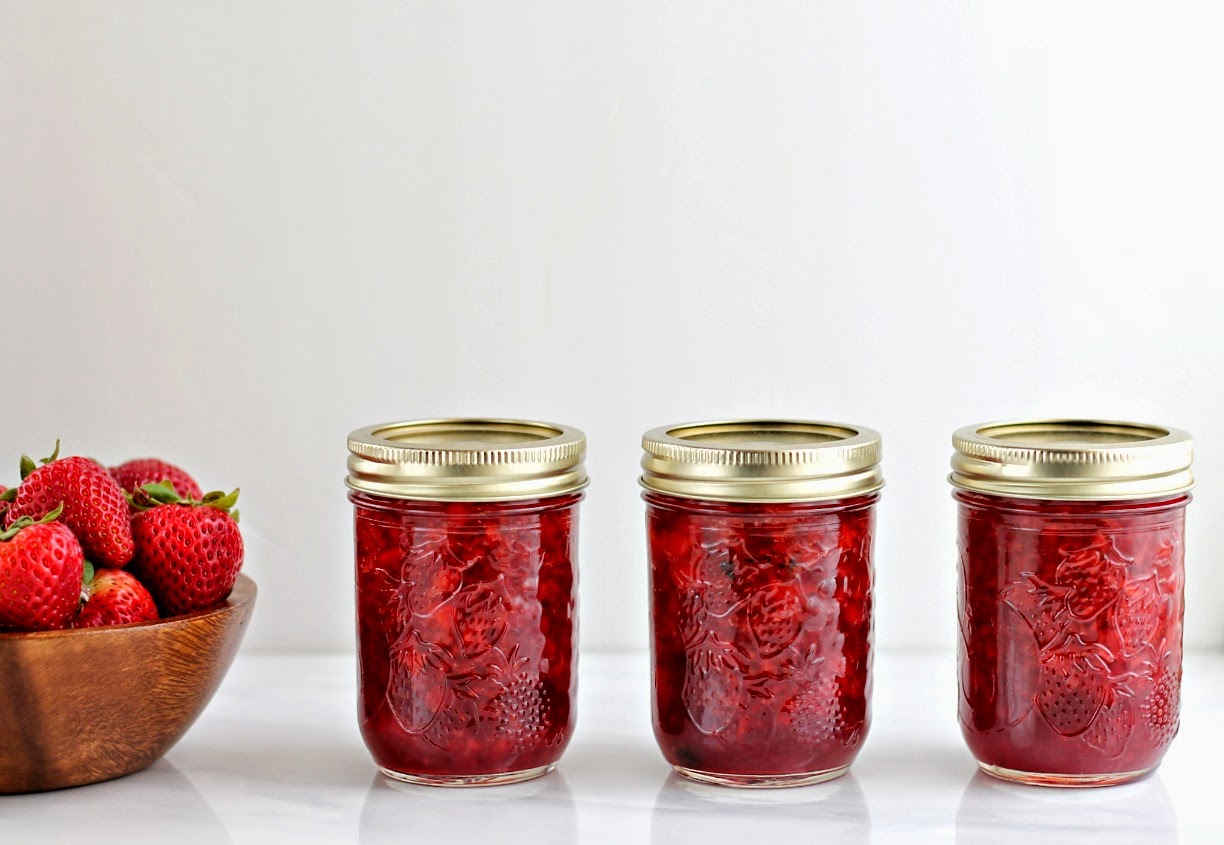 One of the things I love about the weather warming up is the grocery stores being stocked with fresh berries.  Strawberries available in the winter are always lacking in flavour.  Warmer weather always brings sweeter strawberries!  Today I am re-creating Canadian Living's Strawberry Jam in my kitchen.  Their version is infused with vanilla.  I've never made jam before or done canning so I was a little nervous about this assignment.

Before getting started, I Googled how to make jam and more specifically all about the canning process.  I needed to buy a few tools and some mason jars before I could start.  I found a kit that had a jar lifter, wide mouth funnel, magnetic wand and bubble remover/headspace gauge.  I had read online that a canning rack isn't necessary, you can just use folded towel at the bottom of the pot.  After making the jam, I wish I got the canning rack.  I found the towel would rise to the top while the pot filled with hot water was sitting on the stove waiting for the filled jars to go in.  I did not buy a canner and thought one of my pots would be big enough.  I used the pot my mom makes biryani in but it was a tad small in height and the water level was very close to the top resulting in it spilling over onto the stove.  A canner would have prevented this since it would have been taller.

My mistake was to not get my jars hot prior to cooking the jam.  So I was doing a lot of multi-tasking which isn't a good idea when you are making something for the first time.  It was a bit hectic and after making the jam I was so nervous I messed something up...did I cook the jam enough, did I skim off all the foam, was the water hot enough while I was boiling the jars?  You have to wait 24 hours before you can eat the jam.  When we finally opened a jar I was so happy to see that the jar had sealed properly.

We had a taste and I have to say that without a doubt this is the best jam I've ever had.  The strawberry flavour was so fresh and the vanilla was a wonderful addition.  When Hasan came home from school I gave him a taste and he declared it was the best jam he has ever had!  My boys finished half a jar over the weekend!

The recipe makes 8 jars of jam which is a lot for our family but we were happy to share them with family and friends!
The recipe is written for someone who knows how to do canning.  As it was my first time I would have loved if the recipe had more detail on the canning process.  Now that I feel a bit more comfortable canning, I will definitely be making this jam again when we go strawberry picking in the summer!  You can get the recipe for Strawberry Jam over at Canadian Living.

Disclosure: This is a sponsored post for the Canadian Living Blogger Network.  All opinions are my own.
at May 15, 2014
Labels: CLBN, Jam, Strawberry