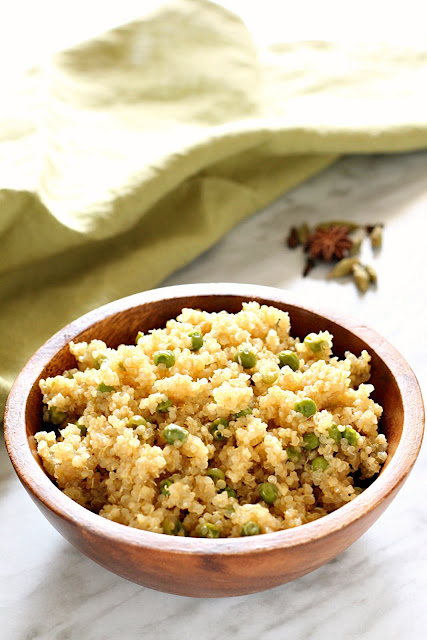 Quinoa is something it's taken me some time to get used to.  I find it has a distinct taste that at first I did not like.  We've been eating quinoa for a couple of years but it's taken me awhile to find recipes that we enjoy.  Initially, I would make them into a patty and fry them.  Since then, I've learnt some methods that have made a big difference for me in the flavour.

From one of my favourite blogs, An Edible Mosaic, I learned to soak the quinoa for 15 minutes.  I have also found that toasting or frying the quinoa a bit makes it taste better.

My kids love Mattar Pulao which is made with rice.  They are having a hard time coming aboard the quinoa bandwagon so I thought I would make quinoa in the same manner as Mattar Pulao.  They are still taking some time to convince but my husband and I really liked it.  It is a healthier alternative to rice.  We enjoyed it with Tandoori Fish.  I mixed some yogurt into mine and my husband mixed in this very quick and easy Masoor Ki Daal.

In a pot, heat oil over medium-high heat.  Add the cardamon, cloves, bay leaf and cinnamon.  Once fragrant, add the peas.

Cook for a couple of minutes and then add the drained quinoa.  Cook this for about 5 minutes, stirring often.

Add the water/vegetable broth.  Once it comes to a boil, reduce heat to low, cover and cook for 15 minutes.

After 15 minutes, check to see if quinoa is cooked and all liquid has been absorbed.  If there is some liquid left, cook for a couple more minutes or until it is all absorbed.

When done, fluff with a fork and enjoy!