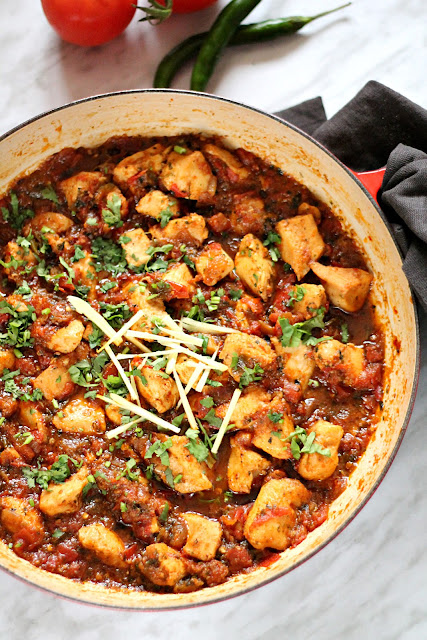 Today I'm sharing a recipe for Karahi Chicken.  It is one of my husband's favourite dishes.  There are a lot of tomatoes and they have to be cooked down and reduced so this dish takes some time to make. I prefer to make it with boneless chicken.  In the picture, I have double the recipe so it took quite a long time. In this recipe, I initially cook the chicken separately.  I find adding raw chicken to the tomatoes releases a lot of water.  Then reducing it results in the chicken becoming very dry.  I've tried this with bone-in chicken, but prefer it with boneless.

In a pan, heat oil.  Add onion and fry until brown.

Add tomatoes, green chillies, red chilli flakes, ground coriander, ground cumin and salt.  Mix well.  Cover, lower heat and cook until tomatoes are mush and oil has separated.  This will take some time as the tomatoes will release a lot of water.  If you double the recipe, it will take even longer.

While tomato mixture is cooking, heat a frying pan with a little bit of oil.  Add chicken and cook until it no longer looks raw.

Once tomatoes are done cooking, add the fried chicken. Mix and cover.  Cook until chicken has cooked through.  Remove lid and increase heat.  Once oil has separated and water gone, add black pepper, garam masala, kasoori methi and ginger (you could also reserve some of the ginger for garnish as I did in the picture).  Cook for another 5 minutes.  Garnish with cilantro and enjoy with naan!